The Kent State Alumni Association’s National Board of Directors is a 21-member volunteer board which meets quarterly. Members must be a graduate of Kent State University. Those who hold positions on the Board have demonstrated involvement, support and commitment to their alma mater. Responsibilities include attendance at quarterly board meetings and involvement in association-sponsored activities.

“The time I spent at Kent State was transformative for me,” said Judge Williams. “When I look back on my time there, I only have fond memories. I also formed meaningful relationships, was given great opportunities and had access to resources that helped shape who I am. I would not be where I am today if it had not been for the special relationships that were formed at Kent.”

She credits her success to the University’s Upward Bound Program where she learned the importance of relationships, hard work and perseverance.

“We are incredibly proud that Judge Williams’ journey began at Kent State,” said Scott McKinney, executive director of Kent State Alumni Association. “Her dedication to serving the public and developing programming for those struggling with trauma and mental illness is inspiring to all. Her priorities closely align with those of the university. We are fortunate to have Judge Williams join us as a Board of Directors member.”

She has presided over the court’s mental health docket since 2005, receiving national recognition for her involvement. Due in large part to her work, the Akron Municipal Mental Health Court is designated as one of five original learning sites by the Bureau of Justice and Assistance and the Council of State Governments.

Judge Williams started the Peace of Mind Probation Program in 2015 after seeing an epidemic of female offenders cycling in and out of the criminal justice system. The program provides a forum for female defendants on probation to develop healthy coping skills and address issues such as depression and anxiety. It aims to help participants change their thinking processes in order to change their reaction to life events and lessen their risk of reoffending. Since its inception, Peace of Mind has had more than 70 graduates.

In 2018, Peace of Mind was awarded the Judicial Administration and Legal Reform Committee Innovative Court Practices Award from the Ohio State Bar Association. The purpose of the Innovative Court Practices Award is to bring greater visibility to exemplary programs in Ohio's courts and to facilitate the transfer of those programs to other courts in the state. Nominees are evaluated on criteria including creativity, the newness of the program and its effectiveness, as well as the transferability of the concept to other courts and whether the program addresses significant issues that are regional in scope.

Judge Williams has served on numerous nonprofit and civic boards throughout her career. Presently she serves on the Project GRAD Akron Board of Directors and the Minerva Fund of Akron Board of Directors. She is an active volunteer with the Akron-based food pantry Sarah’s House. She is also a lifetime member of the NAACP, a lifetime member of Girl Scouts of America, a lifetime certified Bridges out of Poverty Trainer and a member of Delta Sigma Theta Sorority, Inc.

Last year, Judge Williams was also recognized with the Akron Bar Association’s Diversity Award for her commitment to diversity and inclusion in Summit County.

She and her husband reside in Akron and have two adult children. 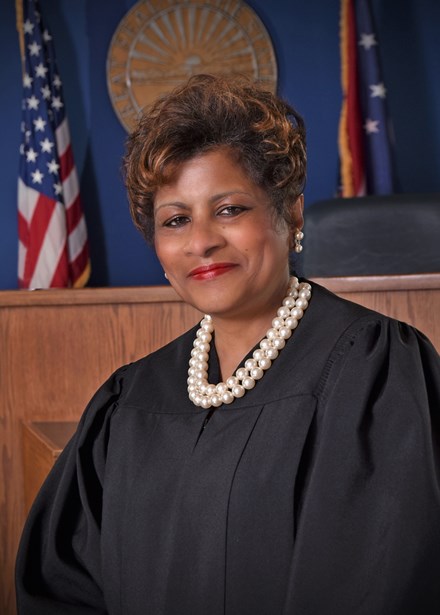